There is a new series of Stockhausen concerts in London and on the radio. The author/compiler of Stockhausen on Music, Robin Maconie, who interviewed Karlheinz Stockhausen over a period of years, will be in conversation with Robin Worby on 'Hear and Now', Radio 3, this Saturday and next, 22.30 to midnight. The BBC Symphony Orchestra performed Inori at the Barbican.

Written in 1973-74, Inori is based on prayer-like gestures interpreted on stage by a mime and a dancer. The expressive movements, performed by the two silent soloists and drawn from a variety of religious practices, are mirrored in the response of two orchestral groups.

For those who like peaceful sounding music with the odd jolt to the senses.

Catheryn
Posted by Catheryn, Kit and/or Rebecca at 1:07 pm 2 comments: 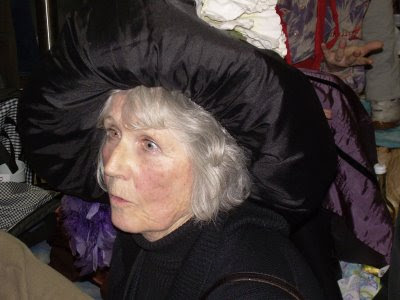 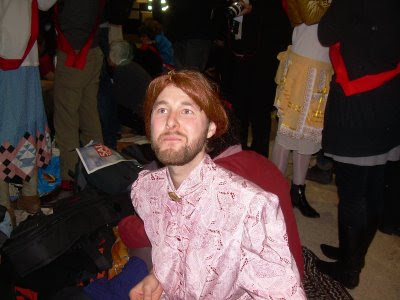 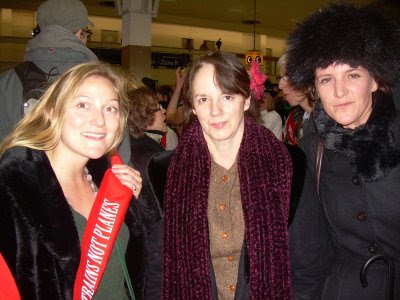 More photos. The middle one is a gentleman enjoying being a woman with a beard - he works for the World Wildlife Fund as an aviation expert. Then you can see Laetitia Rutherford from literary agency Mulcahy Conway, myself, and senior editor here, Rebecca Gillieron, with her fine hat.

The top one is a lady who also has a fine hat, who was being interviewed by the press. I saw a lot of cameras from the BBC (mainly focusing on the string quartet), and microphones labelled LBC radio, so I hope you have caught the press coverage whereever you are. I was glad to read of Emma Thompson assisting Greenpeace in buying land at Sipson, the village which will no longer exist if the third runway is built. I also dealt with the last remaining aga desire in me reading George Monbiot on the fact they contribute five times more carbon to the atmosphere than a conventional cooker. Perhaps my fifteen year old upright gas cooker with the enamel rubbed off is really going to be considered retro and cool rather than just well used!

Catheryn
Posted by Catheryn, Kit and/or Rebecca at 11:40 pm No comments: 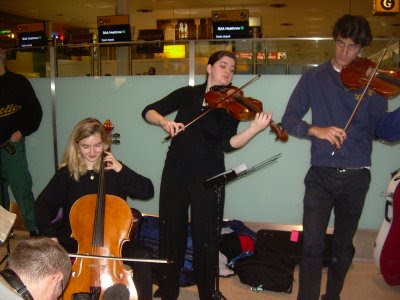 This evening, Rebecca and I went to the Climate Rush peaceful protest at Terminal 1, Heathrow, against the building of the third runway. We emerged from the tube and had to negotiate a cordon of police men and women, some of whom were in good humour. We easily located the demonstration, hearing a string quartet start up. In fact, we followed a girl in a long skirt carrying a violin and a wicker basket from the platform on the Piccadilly line into the Terminal 1 building. She seems to know where she is going, we thought.

The demonstration quickly picked up momentum, with singing, whistles and flags being waved. There were many men with whiskers and top hats, as well as women with red sashes, hats, boots and gloves. There was a lot of cheering, clapping, and general noise making (the elderly couple next to me asked who we were clapping - to which I responded, we're just making ourselves heard.) Trains not planes was one refrain. Tamsin Omond was hoisted onto someones shoulders and we cheered her power of inspiration and organisation.

I took a few photographs - of a World Wide Life man with a beard, who described himself as an aviation expert, John from Greenpeace in the top hat with the whiskers and beard, and a gentleman who told me he was a Christian from Beckenham, Kent, who thought planes were not good for the land which we all shared.

I also asked for a photo to be taken of Rebecca, literary agent Laetitia Rutherford and myself. Hope you like the red flower....I live under the flight path and hope we can all moderate our use of airplanes. I, for one, have never failed to book a flight to a destination I wish to get to and at a price I can afford, and so I do not see the need for more planes in the air - that is my retort to those who say that 65,000 jobs will be created which will further pollute an overcrowded airspace.


Catheryn
Posted by Catheryn, Kit and/or Rebecca at 11:22 pm No comments:

The New Year is thoroughly upon us now. A couple of nights ago I did something which embarrassed me hugely at the time. I felt guilty for not going to a Christmas Eve party next door, as we had family arriving that evening from Switzerland, and as I approached my street, I thought I saw the host in his car returning from work. I wound down my car window and greeted him a Happy New Year - saying I had not seen him yet, very brightly. Then I realised it was the man who lived opposite in the side road, not in my street - and we've never met. Aargh - would he think I was a mad woman - no - he was delighted, and wished me a very good year too! The only memory I have of this man is that when he first moved in a few years ago, he took a cab home most nights. One day, said cab reversed too smartly, and went through the garden gates of the house next door. I rushed over and said, there's a black cab in your garden. There was, dear reader, there was. And a very shocked cabbie, who was fortunately not injured.

May you all get to know your neighbours by whatever means, and have a good New Year.

Catheryn
Posted by Catheryn, Kit and/or Rebecca at 12:09 pm 1 comment: