New Year pick me up 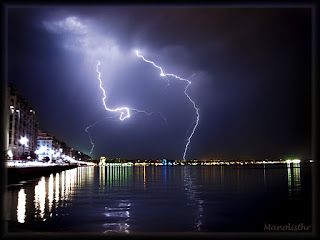 Last night I went to a talk given by Salley Vickers, and she read a few lines from a short story, about taking a bus to from Penzance to St Ives to see the Barbara Hepworth exhibition. She and her friend were alarmed at the speed the driver went at and arrived in a quivering state. She used this experience in a short story, but had a lone man take the bus and use the turns of the run away bus to lurch towards the body of a girl seated next to him, who then accepted a drink from him at his hotel - at which point Salley Vickers stopped her reading.

This brought back good memories of Thessaloniki, Greece. I was on a mission to introduce Greek writers to UK publishers, which resulted in our publishing Vangelis Hatzyiannidis' books, Stolen Time and Four Walls. We had a spare hour between seminars and meeetings so I went into the hotel spa pool for a swim in salt water (it was a tiny pool but the spa was warm, the water salty and very good for mind and soul). I emerged, and a well known female scout invited me to the top floor panoramic bar for a drink. We took our seats at a table with bar stools, and were surrounded on four sides by glass, a view of the port and city, and then there was an almighty thunderstorm with lightning. The skies went dark, then lit up, and opened with torrents of rain. Next, a waiter came over with two tall glasses of white wine, which we had not ordered, and a man on the other side of the bar nodded at us. We could not work out which of us he had decided to honour with a free drink... A highlight, so to speak, of our trip, and a definite pick me up.
Posted by Catheryn, Kit and/or Rebecca at 12:49 pm No comments:

I've been wondering about the self-publishing route, as this weekend the press (Guardian Money section, for one) has had a few stories of individual success stories. If you can publish directly to Kindle, do you feel like an author? Having readers definitely would bring a warm glow, and if you find that you are earning directly from your work, that would feel good.

But what happened to that warm glow of having your finished book in your hands? And what of the publisher's knowledge of how to gain publicity, and how do literary festivals and radio programmes contact the author if they do not have a publisher's office ready and waiting? I think if I was a prospective author, I'd want both - and so I would have to commit some of those Kindle earnings to having my work put in print.

All in all, very interesting times. And I think that people will be encouraged to write more, not less, now that these new routes to readers, let alone markets, are opening up.
Posted by Catheryn, Kit and/or Rebecca at 10:36 pm No comments: